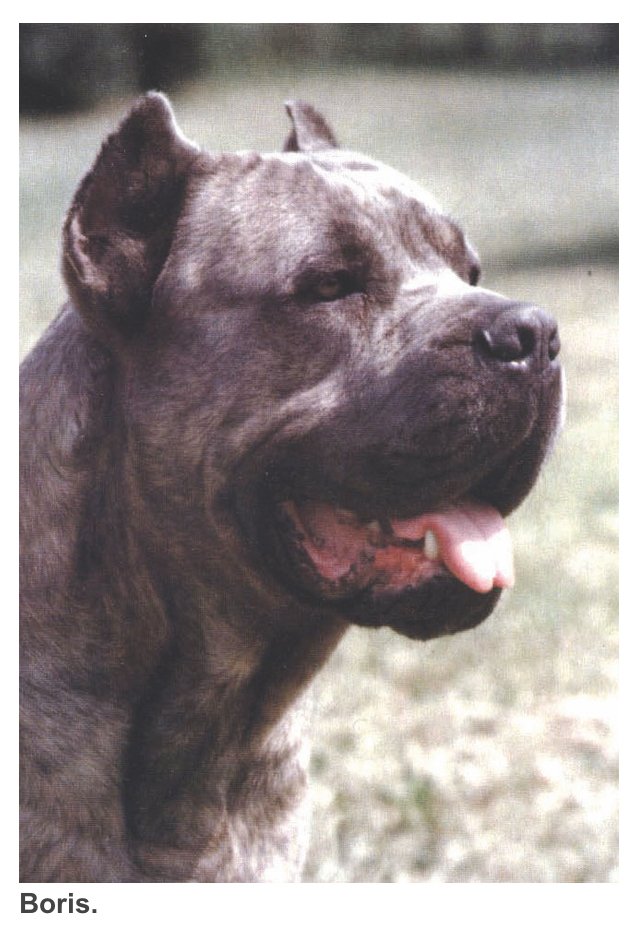 Summary: Here is an account of the recovery of the breed, of course, many have different accounts of what happened back in the 1970’s but we believe in exploring every avenue on the FOCC and hope this helps understand some of what went on in the recovery of this noble breed.

Due to the change in agricultural methods, the lack of big game to hunt and the change in hunting methods as well as the advent of the Second World War the Cane Corso was in danger of extinction as a breed. Only the efforts of enthusiastic Corso fanciers like Professor Ballota and Professor Giovanni Bonatti kept the Corso’s head above water.

Prof. Giovanni Bonatti was a much respected and revered zoologist and zoo-technician who in the 1950’s attention was caught by the plight of the breed. He had already written about the Corso in his book ‘Dogs of all Breed’ and published an article in The Sicilian Hunter in 1957 entitled ‘Breed to be Saved’. In 1973 he wrote to a friend (Dr Berber) on the subject of a short haired rustic Molosser in the southern Italian region of Puglia.

Nearly a year later in his home of Foggia Dr Breber came across these rustic Corsi at his local dog show. He was unsure that these dogs were the same rustic Molosser that his friend had written to him about, so he photographed the dogs and sent them to Prof. Bonatti for verification. Prof. Bonatti together with geneticist Dr Antonio Morsiani assured Dr Breber that these were indeed the same breed. In the late 1970’s Dr Breber read an article asking for information on a ‘medium-large Molossi named Cane Corso’, he published an article describing the dog he had come across in Foggia together with a short history of the use’s of the Cane Corso. He also went on to say that he himself had bred Cane Corso’s and had 19 puppies to date.

At the same time a traveling salesman named  Vito Indiveri, who went on to establish Dyrium Kennels and become a driving force behind the recovery program, was traveling through remote areas of Sicily. He noted that the peasant farmers in these remote regions all owned Corso’s and they were all working dogs, they never sold the pups and there was always competition and jealousy between families that owned them. Due to this a lot of inbreeding occurred, but sometimes puppies were exchanged at local fairs introducing a much-needed new bloodline. In his own breeding he was ferment in his selection of stock and would often go to farm after farm to go back to the genealogy of these Molosser.

In 1979 Dr Breber received communication from Stefano Gandolfi, Giancarlo and Luciano Malavasi regarding the Cane Corso and in 1980 they met for the first time to see Dr Breber’s dogs. They together selected Dr Breder’s bitches Brina and Tipsi together with another bitch named Baback to breed with the selected males named Bulan, Basir and Aliot.

The resulting puppies were given to other enthusiasts who were like-minded to help with the breeding program. Prof. Casolino, Sig. Sereni and Dr. Gandolfi join with Dr Breber, Stefano Gandolfi and the Malavasi brothers in the recovery program and they go onto become the nucleus of the original founders of Corso breed club later.
On 18th October 1983 Dr Breber officially set’s down the core beliefs of recovery program and with the small group of Corso enthusiasts the Societa Amatori Cane Corso (SACC) is founded. On that day 12 Cane Corso’s were measured and documented to set down a breed standard.

In November 1985 the SACC were contacted by ENCI (Ente Nazionale della Cinofilia Italiana, Italian Kennel Club) and official contact took place between them. ENCI appoints 7 official judges who take over the judging at SACC shows.

Unfortunately in 1986 Dr Breber leaves the SACC of which he was a driving force and the breeding programs impudence moves from Dr Breber’s Bresir (son of Dauno and Tipsi) to Giancarlo Malavasi’s kennels in Mantova and his breeding stock.

Stafano Gandolfi, Gianantonio Sereni and Fernando Casolino largely took on the job of running the SACC. Due to Dr Breber’s departure it was decided the breeding program must move ahead at all cost. In 1986 SACC are made aware of 30 new subjects who add 11 new and much needed bloodlines to the recovery program. Meetings were held up and down the country to get together as many enthusiasts as possible as well as to increase the exposure of the breed. At these meetings many tests and measurements were taken, this lead to Dr Antonio Morisiani to edit the official standard and in 1987 it was ratified by ENCI.

In 1989 with ENCI approval the SACC open a ‘Libro Apperto’ (Open Book) to record adult Cane Corso subjects. These subjects must conform to the breed standard and were all tattooed, from 1989 to 1992 over 500 subjects are recorded. From 1992 with ENCI approval puppies born to Sires and Dams recorded in the Libro Apperto are also added to the book.

Meanwhile in 1990 the Cane Corso was shown to the FCI (Federation Cinologique Internationale) at the Verona, European Show, Italy were they where presented with the “Summary of the Morphological Characteristics” compiled by one of the 7 official judges appointed by ENCI Judge Morsiani. Judge Morsiani gave this document  to the FCI Standard Commission in, namely English, German, French and Spanish (the 4 official languages used by FCI). 15 Corso’s were presented to the same panel on this day.

The SACC were contacted by the FCI after the show and were asked to research and identify the Cane Corso bloodlines included in the Libro Apperto. This was a thankless task that involved using a print out supplied by ENCI, the research must be carried out on all dogs from the first entered dog and their descendants and every card issued to register a litter.

SACC submitted their formal request to ENCI for the recognition of the Cane Corso in July 1992 as being indeed an indigenous breed of Italy. In September the following year nearly a 100 Corsi were shown to three of the ENCI appointed Judges (Bernini, Bonetti, and Vandoni) as final proof of their existence. Upon receiving very favourable reports from the Judges the ENCI accepted and ratified the SACC request to recognize the Cane Corso as the 14th Italian breed on 20th January 1994.

Later in the year, ENCI allow the Cane Corso to be shown in their exhibitions. For them to obtain the title of Campionato Sociale, an examination for HD (Hip Dysplasia) must have been carried out. This examination must be carried out and coordinated with the Italian Veterinary Association (AIVPA, Associazione Italiana Veterinari Piccoli Animali).

This was the springboard to set in motion a research program of the entire known Cane Corso population. This data together with data compiled by Professor Claudio Peruccio an expert on hereditary eye disorders at the University of Torino as well as the entire written practice of the breed’s recovery, the complete standard, historical description of the breed, results of analysis of anatomic designs with canine metrical proportions was presented to the FCI. All this was needed if the Corso was to get international recognition.

In May 1996, in the City of Arese in the Lombardy region of Italy, near Milan, the best Cane Corso to be found are gathered. It is agreed that Ch. Boris is to be selected as the model of the breed to be measured up to by Cane Corso’s across the world.

After satisfying the requirements for breed recognition set down by the FCI, the Cane Corso is accepted in December 1996 and officially recognized as the Cane Corso Italiano breed.

The SACC obtained permission from the ENCI to have a work attitude test, CAL-1, a pre-requisite if the title of Italian Champion and Social Champion is to be obtained on 1st January 1997.

In the rest of Europe the Cane Corso marches on as well, in 1990 litters are born in France and Germany. In 1999, 13 Corso’s gather in Britain at a seminar where some are presented for assessment. In Holland the CCCN, which has been operating since 1997, receives official recognition in August of 2000. The Corso is known in Denmark, Sweden, Russia, and the USA amongst many others.